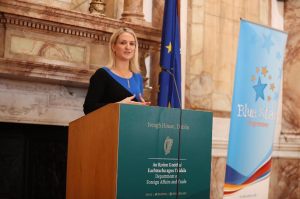 Helen McEntee T.D. (Fine Gael) was elected to Dáil Éireann in a By-Election in March 2013, and re-elected in the General Elections of February 2016 and February 2020.

On the 27th June 2020 Helen was appointed to Cabinet as Minister for Justice by President Michael D. Higgins on the recommendation of the new Taoiseach Micheál Martin.

In June 2017, as part of a Government reshuffle by the then newly appointed Taoiseach, Dr. Leo Varadkar T.D., Minister McEntee was promoted to the position of Minister for European Affairs, where she has worked closely with both the Taoiseach and Tanaiste on BREXIT and Ireland’s vital national interests in agriculture.  She has also led a Citizens’ Dialogue on the future of Europe, and promoted a greater understanding oF European issues amongst younger people through the Blue Star schools programme.

In May 2016, as part of the new Partnership Government under then Taoiseach Enda Kenny T.D. , Minister McEntee was appointed to be Minister for Mental Health and Older People at the Department of Health.

Helen’s legislative achievements since becoming a T.D. in 2013 include the Pyrite Resolution Act, which provides a fund for correction works on homes in the Meath-Kildare-Dublin region that are affected by pyrite. She also contributed amendments to the Road Traffic Act 2014, to support younger drivers and promote road safety.

Minister McEntee is a strong advocate for improved roads and telecommunications infrastructure, including for Meath and the North East. She works closely with farmers and food producers, and is an Ambassador of the annual Taste of Meath Festival. Minister McEntee is also a strong advocate for children with special needs and for improved local health services.

In 2007 Helen graduated from DCU with a B.A (Hons) degree in Law, Politics and Economics. She holds a Masters degree in Communications and Journalism. Helen attended Heronstown National School in Lobinstown, Co Meath, and St Joseph’s Mercy Secondary School in Navan.

Before becoming a public representative Helen worked in the Department of Agriculture and previously for a subsidiary of Citibank.